The Year of Market Ascension

We began 2019 with frigid mass of air from the Arctic pole. This dangerous cold spell, identified as a Polar Vortex caused some 100 million people in the United States to experience temperatures near, or below zero. Cities along the Great Lakes were hit particularly hard. Chicago touched down at -23 degrees on the morning of January 30, 2019, marking one of the coldest days on record.

By contrast, equity markets started the year on a hot streak and offered a glimpse of the ascension they would make during the year. The S&P 500 was up 8% for the month as the Federal Reserve promised to stop raising rates at the end of December, providing a considerable tailwind to the world’s largest equity market. International markets rallied as well following the United States lead of “lower rates for longer”. The MSCI EAFE, representing the international markets, rallied 6.5% signaling a solid start to 2019.1 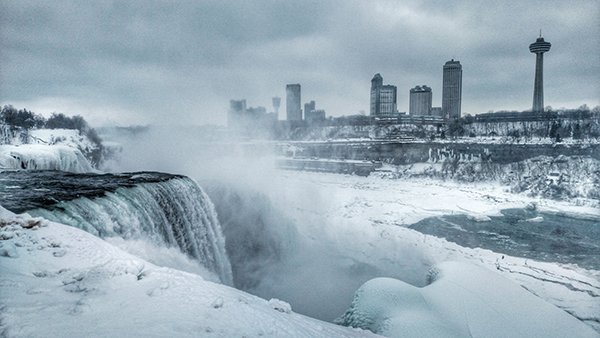 In a sign of how much the world has changed, President Donald Trump met with North Korean leader Kim Jong-un in Hanoi Vietnam on February 27th, 2019. While the summit was cut short due to diplomatic obstacles, it appears that the willingness of each leader to meet has built groundwork between the United States and what is the least understood and closed nation in the world.

While tensions may have cooled on the Korean peninsula, equity and bond markets were hot. With the threat of inflation waning, the bond market rallied 1% in February. The equity markets were participating in this rally as well. The S&P 500 was up 3.2% and the MSCI EAFE, representing the international developed markets, was up 2.55% for the month. A superb January was followed by a solid February, representing two great months of market returns coming out of the gate in 2019.2 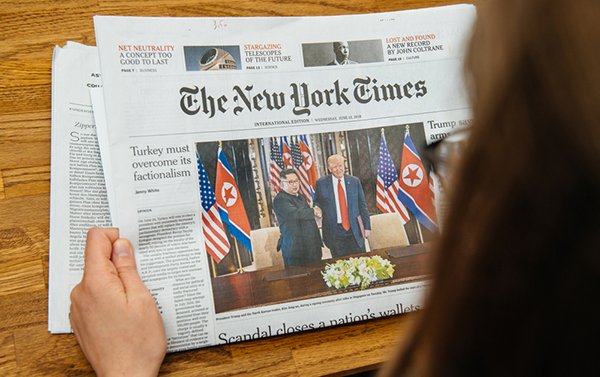 On March 10, 2019 an Ethiopian Airlines Boeing Airmax 737 crashed near the capital Addis Ababa. All 157 people aboard perished shortly after taking off.3 This followed a Boeing Airmax Lion Air flight that went down in the Java Sea in October killing all 189 people on board. Soon thereafter, the AirMax 737 was grounded across the globe due to safety concerns. A series of issues continued to haunt the airline maker throughout the year, ultimately resulting in the resignation of Boeing CEO Dennis Muilenburg.4

As the Airmax 737 was grounded, markets continue to rally with minimal resistance. The S&P 500 continued its dominance of equity markets, rallying almost 2% during the month. The MSCI EAFE chipped in a little more than a .6% in returns. The MSCI Emerging Markets continued to be hampered by China trade tension but managed a respectable .84% return for the month. The U.S. bond market rallied 1.92% for the month as the yield curve inverted, or simply put, shorter term debt yielded more than longer term debt.5 Yield curve inversions may signal weakness in the economy or a looming market pullback, although little concern seemed to surface in 2019 markets.6

Tiger Woods secured the 2019 Masters Tournament. Tiger had not won a major tournament since 2008 and his last Masters win was over fourteen years ago. Tiger Woods, widely regarded as one of golf’s greatest, offered a storybook comeback after numerous personal and medical issues in the last decade that sidelined and/or hampered his golf career.

The dovish tone by the Federal Reserve sent markets skyrocketing in April to new highs. The S&P 500 was again the leader, returning 4.05% for the month and now up 18.25% for the first four months of the year! The Russell 2000, representing U.S. small companies, also came in strong with a 3.4% return. While markets enjoyed new highs, international markets rallied but were quickly falling behind the domestic markets accelerating ascent.7 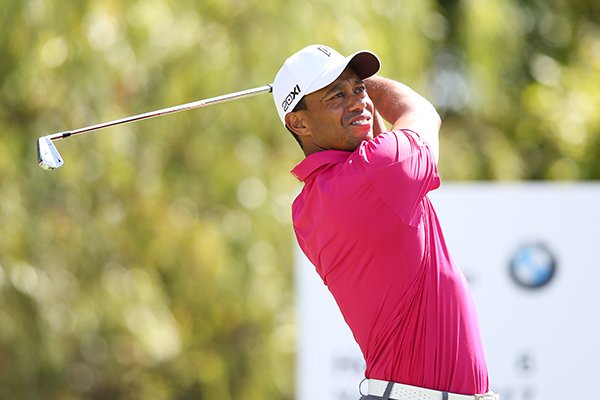 May offered one of the rare market setbacks in 2019. Trade tensions between China and the U.S. escalated after President Trump moved tariffs from 10% to 25% on $200 billion of Chinese goods in May. President Trump expressed frustration that talks were moving too slowly and a deal should have been reached previously with China. Chinese officials, not to be outdone, detailed their own set of retaliatory measures against U.S. goods in a sign of growing brinkmanship by both sides.

As expected, equity markets sold off considerably in May. The S&P 500 was down 6.35% and the Russell 2000 was down 7.78%. Emerging Markets were off by 7.26%, as China shares tumbled on tariff concerns. On the other side of the investment world, fixed income rallied by 1.78% as investors embraced “lower for longer” yields and a flight to safety.8 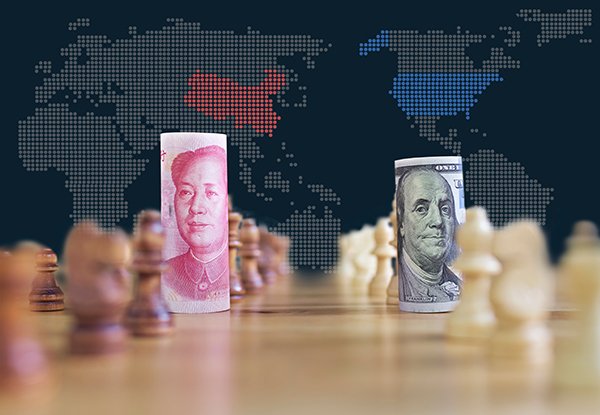 Hong Kong was a hotbed of political protests by pro-democracy demonstrators. One of the largest demonstrations took place on June 9th, 2019 triggered by the Fugitive Offenders amendment bill which was viewed as undermining the regions autonomy. The bill was ultimately withdrawn by summers end; but protests have continued for other demands not met, and the city has been roiled with violent clashes and creative disruption ever since.

While China was rocked by Hong Kong protests, they did make progress on the trade front with the U.S. President Trump and President Xi Jinping speaking by phone on June 18th, agreeing to rekindle talks. The day after, on June 19th, Mexico became the first country to ratify the new North American free-trade agreement with the U.S and Canada boosting markets.9 (Many believe Mexico may be the real winner in the U.S./China trade war.)

The S&P 500 was up over 7% for the month while the MSCI Emerging Markets was up 6.24% on renewed trade talks and a new NAFTA agreement.10 And the rally continues onward…… stay tuned for Part 2 of “A Look Back On 2019, The Year of Market Ascension”… 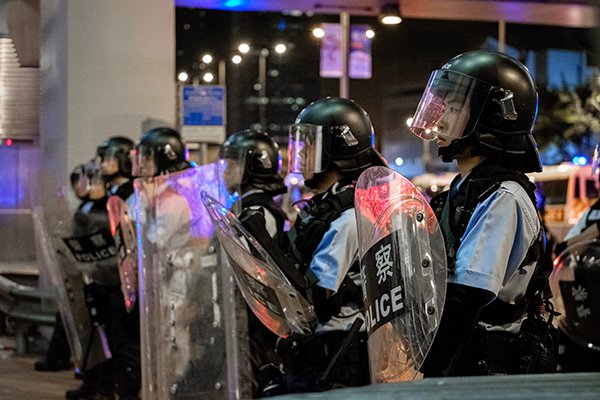 The first half of 2019 displayed a remarkably powerful market ascension with little interruption. Through the first half of 2019, the S&P 500 was up 18.54%, representing investor enthusiasm for the economy while a contentious geopolitical environment and trade uncertainty was not to spoil this party.11

Investment in the portfolios mentioned in this document may not be suitable for all investors. Past performance is not a guide for future performance and should not be the sole factor in consideration when selecting investments. The price of investments may go up or down and the investor may not get back the amount invested. Your income is not fixed and may fluctuate. The value of investments involving exposure to foreign currencies can be affected by exchange rate movements. Levels, bases and reliefs from taxation can change.
Past performance is no guarantee of future returns.

A word about risk: Equities may decline in value due to both real and perceived general market, economic and industry conditions. Investing in the bond market is subject to certain risks including market, interest rate, issuer credit and inflation risk; investments may be worth more or less than the original cost when redeemed. Investing in foreign denominated and/or domiciled securities may involve heightened risk due to currency fluctuation, economic and political risk, which may be enhanced in emerging markets. Mortgage and asset–backed securities may be sensitive to changes in interest rates, subject to early repayment risk, and their value may fluctuate in response to the market’s perception of issuer credit worthiness; while generally supported by some form of government or private guarantee, there is no assurance that private guarantors will meet their obligations. High-yield, lower-rated securities involve greater risk than higher-rated securities; portfolios that invest in them may be subject to greater levels of credit and liquidity risks than portfolios that do not. Alternative strategies such as arbitrage, hedged equity, market neutral or long/short may result in higher internal transaction costs and tax consequences of short-term gain. Funds may engage in option transactions and short sales. Option transactions involve special risks that may make it difficult or impossible to unwind a position when the fund desires. With short sales, you risk paying more for a security than you received for its sale. In addition to the normal risks associated with investing, merger arbitrage strategies may realize losses if the proposed reorganizations in which the strategy invests are renegotiated or terminated. Other arbitrage strategies may include but are not limited to convertible risk, synthetic convertible risk, convertible hedging risk, and covered call writing risk. In hedged equity strategies, selling index call options can reduce the risk of owning equities, but it limits the opportunity to profit from the increase in the market value of equities in exchange for the upfront cash at the time of selling the call option. Additionally, hedged equity strategies may lose part, or all of the cash paid for purchasing index put options. Unusual market conditions or the lack of a ready market for any option at a specific time may reduce the effectiveness of a hedged strategy. Diversification does not ensure against loss. There is no guarantee that these investment strategies will work under all market conditions or are suitable for all investors. Each investor should evaluate their ability to invest long-term, especially during periods of downturn in the market.