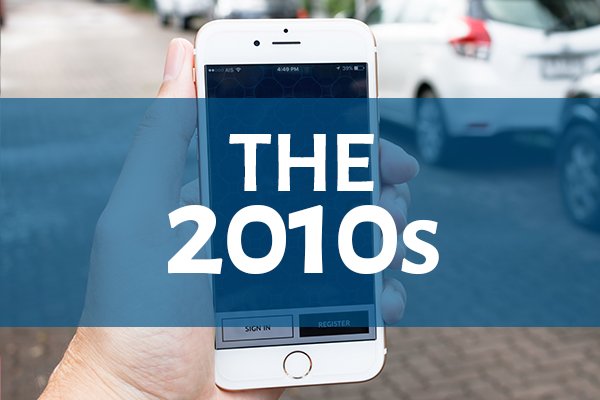 Many news outlets do a “Decade in Review” piece at the turn of a new decade and, not surprisingly the most talked about topics in many of those pieces were related to advances in technology. The iPhone was released in 2007; and technology at our fingertips allowed Amazon to transform retail, Airbnb to change where we stay and Uber to change transportation. We now control our own “screen time” with on-demand entertainment replacing scheduled programming. A decade ago, the stock market was in the beginning stages of its recovery out of the global financial crisis, on its way to becoming the longest bull market on record.

In keeping with the “Decade in Review” theme, I thought it would be fun to look back and reflect on the winners, losers and some of the market’s biggest surprises of the past ten years.

As the “FAANG” acronym (Facebook, Apple, Amazon, Netflix, Google) seemed to be ubiquitous throughout the decade, it may not come as a surprise that the best performing stock of the past ten years was one of these five. Thanks to the way it changed how people watch TV and movies, Netflix was the biggest winner in the S&P 500, up a whopping 4,011%.2

Conversely, the worst performing stock of the decade was Frontier Communications, down close to 99%. The company provides wireline (not wireless) telephone services, thus not unexpected it’s lost so much in market cap given the rise of the smartphone. This pairing dramatically demonstrates the role of technological change over the past decade.

Indeed, the entire U.S. economy continued along the path it forged in the 1990s, with technology advancing in importance at the expense of manufacturing. In the stock market as well, it was technology’s decade. The tech sector was the best performing component of the S&P 500 in the 2010s, rising a cumulative 401%. Though Netflix was the best performing stock of the decade, it is somewhat surprising that none of the other “FAANG” stocks cracked the top 10 (Amazon was the eleventh best performing stock within the S&P 500)3 . In second place came consumer discretionary stocks, returning 388%. At the other end of the spectrum is the energy sector, which had a lousy decade, returning only 38%, or just over 3% annually4. At the start of 2010, energy comprised more than 10% of the S&P 500. By the end of the decade, energy stocks represented barely more than 4% of the index. Though fracking certainly was a boon to the U.S. oil industry, and it significantly reduced our reliance on foreign oil, there is no doubt that energy stocks suffered as oil supplies grew.

One of the most surprising aspects of the 2010s was that it was the first decade where the U.S. did not experience a recession5. While the economy certainly had its scares, the U.S. is still in the midst of its longest expansion in history at 126 months6. With the advent of central banks in the earlier part of the 20th century, and the move off the gold standard which gave rise to an abundance of credit, the U.S. economy has experienced fewer and fewer recessions over the years. The chart below depicts U.S. recessions, as shown by the gray bars, since the mid-1880s. After World War II, the frequency of recession in the U.S. declined dramatically, and since the 1980s, we’ve enjoyed even longer periods of economic growth before the onset of a recession. 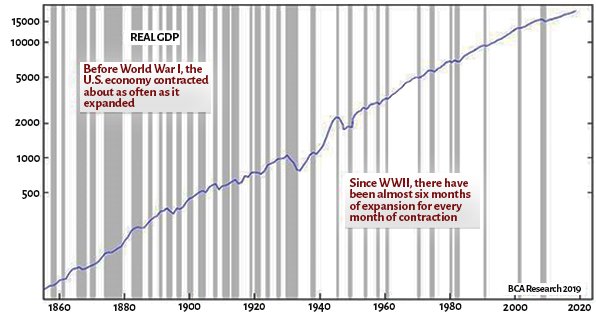 Interest rates were all the rage

Though interest rates have been precipitously declining ever since the early 1980s, this decade bore witness to an inordinate amount of negative yielding bonds globally, and the U.S. 10-year government bond hitting an all-time low of 1.36% in 2016. Coming out of the financial crisis, interest rates, as measured by the U.S. 10-year bond, were at a relatively muted level of 3.86%7. Interest rates hit their high of the decade on April 5, 2010 at 4% and never looked back, as the 10-year bond ended 2019 at 1.91%.8

The U.S. was fortunate to be one of a handful of developed countries to never have nominal rates dip below zero. In August 2019, the amount of negative yielding debt globally hit a record of $17 trillion9 as investors worried about an ongoing economic slowdown and central banks continued to cut rates to stimulate their economies. Time will tell how all the monetary experiments will shake out, but for now, as inflation remains subdued, interest rates ought to remain lower for longer. The 2010s were defined by low birth rates, burdensome debt levels, and high-tech jobs—leaving both corporations and consumers with little need and limited desire to borrow money.

As the twenties begin, there are a lot of uncertainties globally – where will interest rates go, how will Brexit fare and who will be the next U.S. President? Will the 2020s look like the 1990s and 2010s, with healthy growth, a strong stock market and low interest rates? Or will slow growth and high inflation usher in an era akin to the 1970s?