Investors and economists alike prefer to describe the graphical representation of an economic recovery through various letters of the alphabet. The letter “L” describes a sudden drop off with a lasting leveling off period. The letter “V” describes the economic drop off with a sharp recovery and considered a best-case scenario. As the pandemic lingered, the letter “U” was introduced, to describe the drop off and slow, but gradual recovery. More recently, some economists have warned of a new letter, one that haunted the United States in the 1970’s and early 1980’s. That letter is “I” and represents inflation.

Inflation is often measured by the Consumer Price Index (CPI). The U.S. Bureau of Labor statistics defines the CPI as a measure of average change overtime in the prices paid by urban consumers for a market basket of consumer goods and services. Recently, several key components of CPI have been ratcheting higher. Headline CPI, or the typical CPI often quoted, includes the volatile but critical components of food and energy. 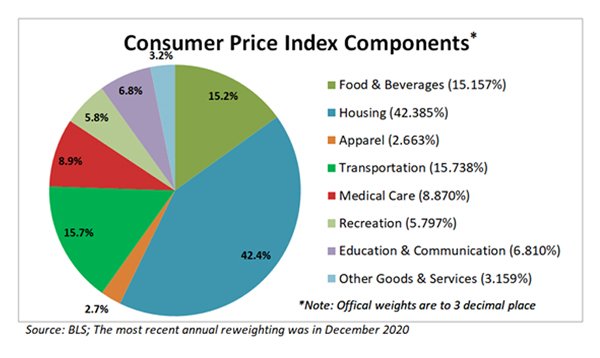 Due to the environmental challenges with food or supply shocks to energy, many economists quote Core CPI, which excludes those volatile components in assessing overall price inflation. Recently, oil supply shocks have triggered higher gas prices, including policy changes from OPEC as well as pipeline disruptions from cyber-attacks. And if oil prices did not inflict enough wallet damage, the winter storms in Texas sent chicken prices flying sky high in recent weeks as stockpiles are still recovering. Given the two conspicuous inflation factors for Americans, driving and chicken wings, concern seems very warranted. 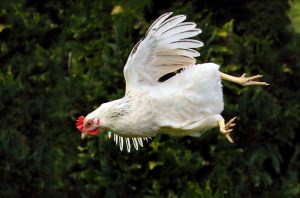 Core inflation, which economists are mostly concerned with, excludes the volatile energy and food factors. But in the case of Core CPI, there has been a large jump in some price components. One may only look to the hot housing market and the corresponding prices of lumber to begin to get nervous. The persistent low mortgage rates and increased savings among segments of the population have sent the housing market to bidding war frenzy. On the supply side, new housing starts have been slow due to labor shortages and the volatile nature of lumber prices. (Interesting enough, one reason for high lumber prices is that an infestation of pine beetles is destroying critical Canadian lumber in British Columbia and in the U.S. Pacific Northwest).1 In addition, labor shortages for lumberjacks and truck drivers continue to push lumber costs higher. In both cases of CPI components, housing, and lumber, we are seeing supply side challenges that create higher than usual price increases in Core CPI. With the many supply side issues at hand, economists are suggesting these issues are “transitory”, and the pace of inflation will soon slow. In many inflationary situations, that may be correct given the massive imbalances in the labor market and uncommon issues in the supply chain.

But it may be shortsighted to assume most of the recent inflation is transitory and simply supply-side challenges. There is an incredible pent-up demand from the pandemic quarantine and year long absence of traditional consumer spending. The multiple stimulus payments and the commitment of federal and local governments to stabilize the economy have kept the economy from cratering. But it may come with inflationary costs not yet fully understood. Not to mention, the labor shortage mentioned earlier is creating wage increases, which are harder to reign in or reverse later.

Is there a short-term supply-side inflation issue or a long-term demand inflation problem?  The answer may be somewhere in-between given the various economic components and dynamics to the recovery from a pandemic economic malaise. Regardless, the portfolio management team at Fragasso Financial Advisors is studying the inflation signals closely to protect your valued assets from any pricing difficulties. We welcome both sides to the argument as depicted in this article, and we remain attentive to market risks, including the letter “I” = inflation.