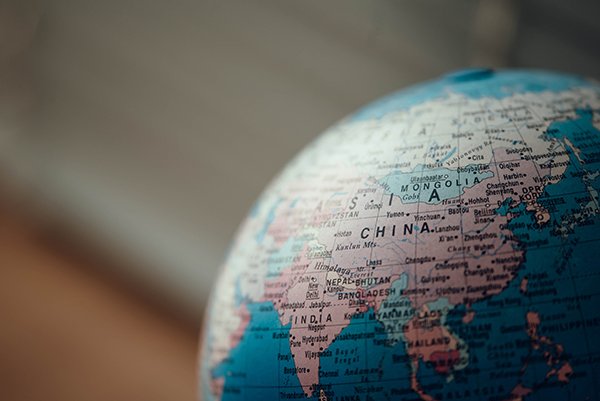 A) Even preceding his time on the campaign trail, Trump has long been a critic of U.S. trade relations with China. His biggest gripe is against the trade imbalance between the two countries, or the trade deficit. The gap between Chinese goods imported to the United States and American goods exported to China hit a record level last year of $375 billion[1], though that number is probably not an accurate representation of trade dynamics between the two countries. This is because the past three decades have seen a tremendous rise in global value chains. Gone are the days that a product is manufactured from start to finish in a single country like China then shipped to America. Today, most electronics, for example, are comprised of parts from South Korea, Japan, Taiwan, and elsewhere and then assembled in China. And when the product is shipped from China to the U.S., it’s hard to argue that the entire value of the finished good should count as an import from China, but that’s how the official trade statistics show up. But the fact that this data point is arguably less relevant today than in years past is immaterial. Trump thinks we’re getting hosed on trade.

China is obviously the biggest target of Trump’s tariff policies with $250 billion in goods announced thus far, but the European Union has also played a role, particularly regarding auto tariffs.

Q) Is having a trade deficit a big deal?

A) Trump firmly believes that trade is a zero-sum game and having a trade deficit is detrimental to the economy. We find this assumption to be faulty, as trade deficits are not always bad for consumers and U.S. workers. The U.S. is the wealthiest nation on the planet, with an average household income of roughly $45,000 per year. China, on the other hand, is still a relatively poor nation where the average income for a family is $10,000[2]. Thus, Americans have a far greater propensity to buy more overall goods than the average Chinese citizen. Additionally, and while manufacturing still remains a vital part of the economy, the U.S. has gradually moved from a manufacturing economy to a service oriented one. In 1970, 26 percent of U.S. workers were employed in the manufacturing sector[3]. Today that number is below 9 percent.[4] While manufacturing as become less an integral part of our overall economy, we continue to consume more and more, thus leading to trade deficits. America is really a service-led nation, as we have a tremendous amount of intellectual capital. And though we run a trade deficit in goods, we in fact run a trade surplus in services of more than $200 billion[5]. As American companies remain some of the most innovative in the world, the main contributor to our services surplus has been payments or royalties for the intellectual property rights stemming from the technology that these companies have developed.

Q) How will this affect the economy?

A) If there were no retaliations from other countries, tariffs could theoretically be expansionary. By raising the price of imports, it causes consumers to purchase more domestically produced goods. Assuming that the U.S. economy is operating below capacity, this would increase our output. But, the general increase of prices on goods could have the adverse effect of reducing consumer’s willingness to spend. These points are generally moot as we are seeing retaliatory measures from both China and Europe. So the tariffs that may help certain U.S. companies benefit are being offset to a degree by the resulting tariffs from China and Europe that will hinder other businesses.

But more likely than not, trade skirmishes create uncertainty, and businesses owners don’t like uncertainty. Spending plans will likely be delayed or reduced, which unfavorably impacts economic growth.

Q) Is this just a negotiating ploy by Trump? Will there be a deal with China and the E.U.?
A) The big unknown regarding trade with Europe is what’s going to happen with auto tariffs. We hope this is just rhetoric as imposing tariffs on cars and auto parts would not only impact our biggest trading partners: Europe, Japan, Canada and Mexico, but it would also be seen as extremely protectionist. With Europe, Trump wouldn’t be pursuing unfair trading practices, which he is doing with China. He’d be further isolating the U.S. from global trade in general.

In regards to China, it’s looking less likely that this is a ruse by Trump to get concessions. Saying he’s willing to impose tariffs on all $500 billion worth of imported Chinese goods is hopefully just a ploy, but he should be taken at his word with the $200 billion in tariffs already announced. Keep in mind that China did offer Trump a deal in which he could have declared victory when China promised to buy $70 billion in additional American goods, but he quickly rejected that offer.

Going forward, China is not going to capitulate easily. First, they don’t want to be seen as giving into Trump. Also, they believe their government has more tools than the U.S. to combat the negative effects from a trade conflict. Lastly, President Xi is effectively president for life. He doesn’t have to worry about reelection processes as other politicians would.

A) Naturally risks are to the downside if more and more goods have tariffs imposed on them. In that event, we’d expect to see a broad-based sell-off in the equity markets. Emerging markets and developed international stocks would likely be hit the hardest given their greater reliance on global trade. The dollar will most likely continue to rally not least because more flows will make their way into the U.S., but also because China will have no problem letting their currency devalue (to help offset the tariffs), and the euro could weaken further given growth concerns. We aren’t proponents of making investment decisions based on the workings of political operatives. Asset allocation decisions should be made in the context of the business cycle, which we believe is slowing. Thus, we have recently reduced our exposure to developed international equities and increased our allocation to U.S. large cap stocks as this asset class has historically been observed to be more defensive given a slowdown in global growth.

The opinions voiced in this material are for general information only and are not intended to provide specific advice or recommendations for any individual. Economic forecasts set forth may not develop as predicted and there can be no guarantee that strategies promoted will be successful. All performance referenced is historical and is no guarantee of future results. Stock investing involves risk including loss of principal. International investing involves special risks such as currency fluctuation and political instability and may not be suitable for all investors. These risks are often heightened for investments in emerging markets.