Where do we stand?

Where do we stand? “We may not know where we’re going, but we sure as heck ought to know where we stand” is an oft-uttered refrain from the legendary investor Howard Marks. In his recent memo, he laid out his six options for investing in a low-return world:

I think the best option(s) are a combination of numbers two and three. Regarding option number four, we recognize that a modest cash reserve is a viable part of a normal investment plan, as cash can be deployed advantageously around market weakness. However, selling positions and sitting in substantial amounts of cash is essentially a market timing strategy that is more likely to be detrimental to portfolio returns over time.

Going forward, it is important for investors to understand that returns are most likely going to be lower. If investors can accept and be comfortable with that likelihood, then a prudent choice may be to do nothing at all and simply stick with long-term investment plans.

Similar to having a small cash reserve set aside, reducing risk in preparation for a correction can give investors dry powder that can be reallocated during periods of market weakness. The drawback, however, lies in the risk that investors could be waiting a long time to redeploy those assets thus missing out on a continued market rally.

Given the run we have seen in equities over the past couple of years, investors still continue to worry about an imminent crash or correction. As prior writings from our firm have shown, we share concerns about valuations in aggregate. Part of our job is to understand what both bulls and bears are saying, and invest based off of what we believe is the most likely outcome. Here’s how we see things on both sides of the market “aisle”. 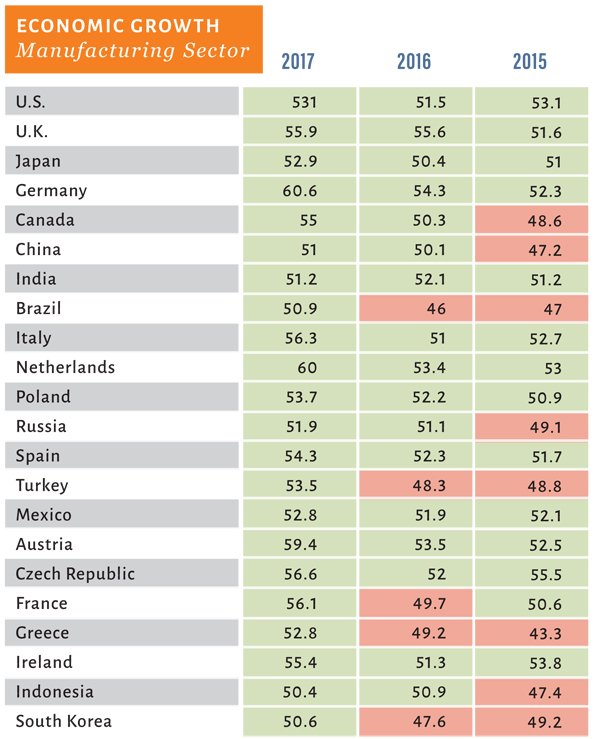 Economic Growth Spurt: Economic growth has picked up quite dramatically since mid-2016. In fact, this has been the most synchronized global upturn since 2010 and continues to provide a highly supportive macro backdrop. GDP growth in nearly every major economy continues to remain in an upward trend. In the chart to the right, a green number signals manufacturing growth for a country, a red figure indicates that growth is slowing. As the leftmost column shows, “slowing” is basically non-existent.

Additionally, the upturn in global growth is being led by an increase in corporate investment spending. This is a positive for equities as US investment growth has typically been correlated with equity returns.

Earnings Growth: Yes, the S&P 500 is up 17% this year.1 But we finally have a year where earnings are a significant contributor to that rise and equity returns are not stemming solely from an expansion in multiples. That being said, we still believe that the best outcome for stocks over the next year is for flat returns and earnings to continue increasing – this scenario would allow multiples to contract without a material decline in equity prices occurring.

“Hated Rally”: One consistent pushback that we get from clients is that we are overdue for a correction. Investors may be too jaded by the last two bubble-infused crashes and feel as if another is imminent even though I believe a recession is not on the horizon. Further, investors should be aware of the following factors that may mitigate another massive sell-off:

• GDP growth during this cycles has been one of the lowest on record. A weak recovery could reduce the risk of excesses being built which can cause a bubble – this was the case for sub-prime mortgages and tech stocks in the previous two bubbles.

• Banks are far better capitalized now than they were in 2007.2 Jamie Dimon, the CEO of JP Morgan Chase, has even pointed out that Lehman Brothers likely would not have failed today under the same conditions, given the capital enhancements required by regulators.

• From my perspective, the general market euphoria that typically precedes a crash seems absent today, particularly from the fearful individual investor.

Interest Rates, Wages, Inflation, Oh My!: One of the biggest risks to the markets that we see heading into 2018 is that policy, or the ebb and flow of costs that impact business and consumer spending, looks set to tighten. Interest rates, inflation, oil prices and changes in wage growth all affect how businesses and consumers spend money and all of these factors tend to be intertwined. With the unemployment rate at cycle lows and more firms reporting labor shortages, employee wages could begin to increase. If wages increase, corporate profits may likely be pressured. If profits fall, businesses tend to spend less which creates a drag on economic growth. Additionally, if wage growth rises too quickly, then I believe that overall inflation is likely to follow suit. This may put greater pressure on the Fed to hike rates more quickly than anticipated by the markets, which could also be bearish for equities. This is why four out of the last five market peaks have occurred when unemployment was below the rate the Fed deems as full-employment.

China Redux: In early 2016, the main topic of conversation with clients focused on China’s economic issues. Today, concerns surrounding China have fallen off the radar screens at client meetings and even in news outlets, despite Chinese macro surprises actually rolling over fairly sharply. China is the world’s second biggest economy, and a sputter in economic growth would reverberate across the globe. Bear in mind, however, that these concerns have been a persistent dark cloud looming for a number of years, so investors appear to be growing increasingly comfortable with the uncertainty.

From One “First Ever” to Another: Global markets have had an unprecedented amount of accommodation from central banks via low interest rates and quantitative easing over the past eight years. The Fed was the first to begin tightening in 2016, initially by increasing the Fed funds rate and most recently by tapering purchases in the bond market. As other central banks follow suit, we wonder how the markets will react knowing that central banks are not providing the same level of liquidity that they once were. As many pundits believe that quantitative easing and low interest rates had a disproportionate positive effect on the equity markets, how can taking away the punch bowl not have a negative impact? The global economic picture is extremely difficult to manage, even for some of the smartest minds that academia can produce. Bear in mind that the rise of the Fed in the US as a supposedly stabilizing force has resulted I three major equity sell-offs deemed to be “once in a generation” events (late 1980s, the tech bubble in the early 2000s, and more recently in 2008).

Based on our assessment of these factors, we continue to believe that it is prudent to remain cautious at this point in the cycle. Further, we would disagree with the most negative forecasts, as we do not expect a major crash in the near term. While there may be a painful correction, investors should remember that corrections are commonplace in the markets – we just have not had one in a while. Expensive assets can certainly get more expensive, and until they do we are tempering our expectations for returns on a diversified portfolio.